For thousands of years, humans have stared at the heavens, wondered at its beauty, and of course, have worshipped it in several cultures. Ancient civilizations of Egypt, India, and China had a phenomenal knowledge of the celestial bodies and its intricate workings. However, their knowledge was limited to their ability to see the objects and examine them in a magnified scale. The field of astronomy, and science in general, became relatively a bit stagnant during the 1st millennium CE, due to proliferation of sophistry driven by state’s oppression and religious persecution. Later in the 16th century, Galileo Galilei made improvements on an antecedent telescope prototype, resulting in what we now know as Refractors. Although he was not the first person to invent telescopes, he was the pioneer to point the revolutionary apparatus to the sky for observations.

Galileo’s research using his primitive refractor led to various groundbreaking discoveries such as the moon not being a perfect sphere, and Jupiter having its own satellites (deservingly Jupiter’s four largest satellites have been named as the Galilean moons). His publications supporting Copernicus’ heliocentric model resulted in his subsequent conviction by the church for heresy. But that did not stop the scientific community to stop gazing at the stars. Better tools were invented and greater lessons were learnt. The astrophotography tools that we have at our disposal today resulted from centuries of effort. And to use the tools efficiently and enable you to become the amateur astronomer that you aspire to be, I have drafted Prabhu’s counsel.

Prabhakaran (or Prabhu, as well known to many) is an amateur astronomer and a renowned astrophotographer who has immensely contributed and influenced the budding community in India. His magnificent images of the Luna (Earth’s moon), the Sun, planets in the solar system, and several deep space objects have made the rounds on the Internet. In fact, one of his recent photographs of the moon was published in ISRO’s official page and was printed in the information sheet during the Chandrayaan 2 landing event. 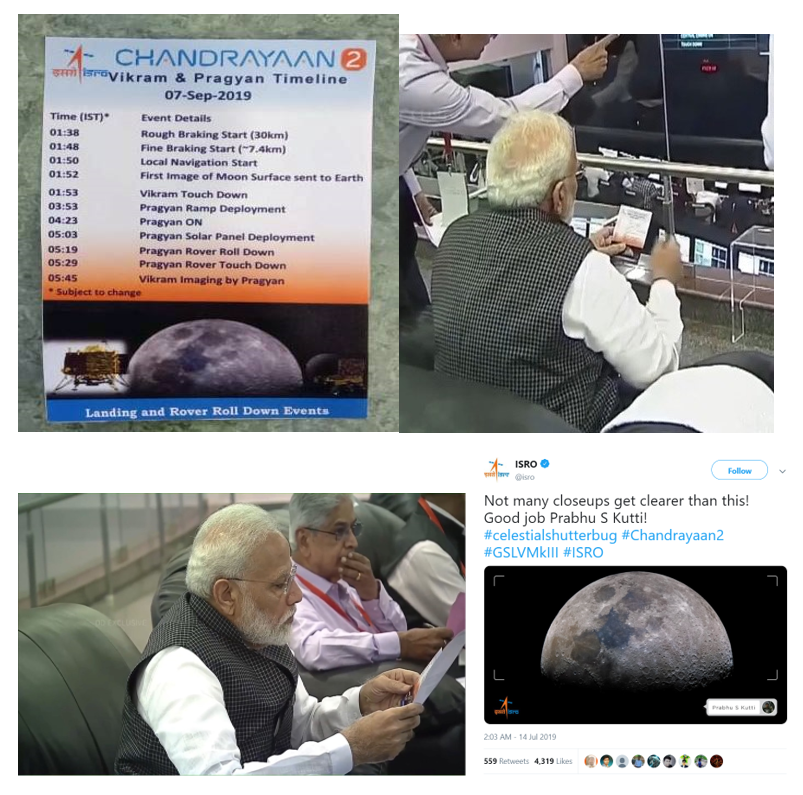 Currently, he is working at the Mleiha Archaeological Center in Sharjah as an Education Coordinator. Apart from organizing stargazing sessions, he regularly conducts workshops for students in the fields of astronomy, archaeology, and paleontology. His favorite part of the job is in educating others – which is evident from his career choices. Before working at Sharjah, he worked as an Astronomy Educator at Space India, where he taught astronomy and space science to school kids. 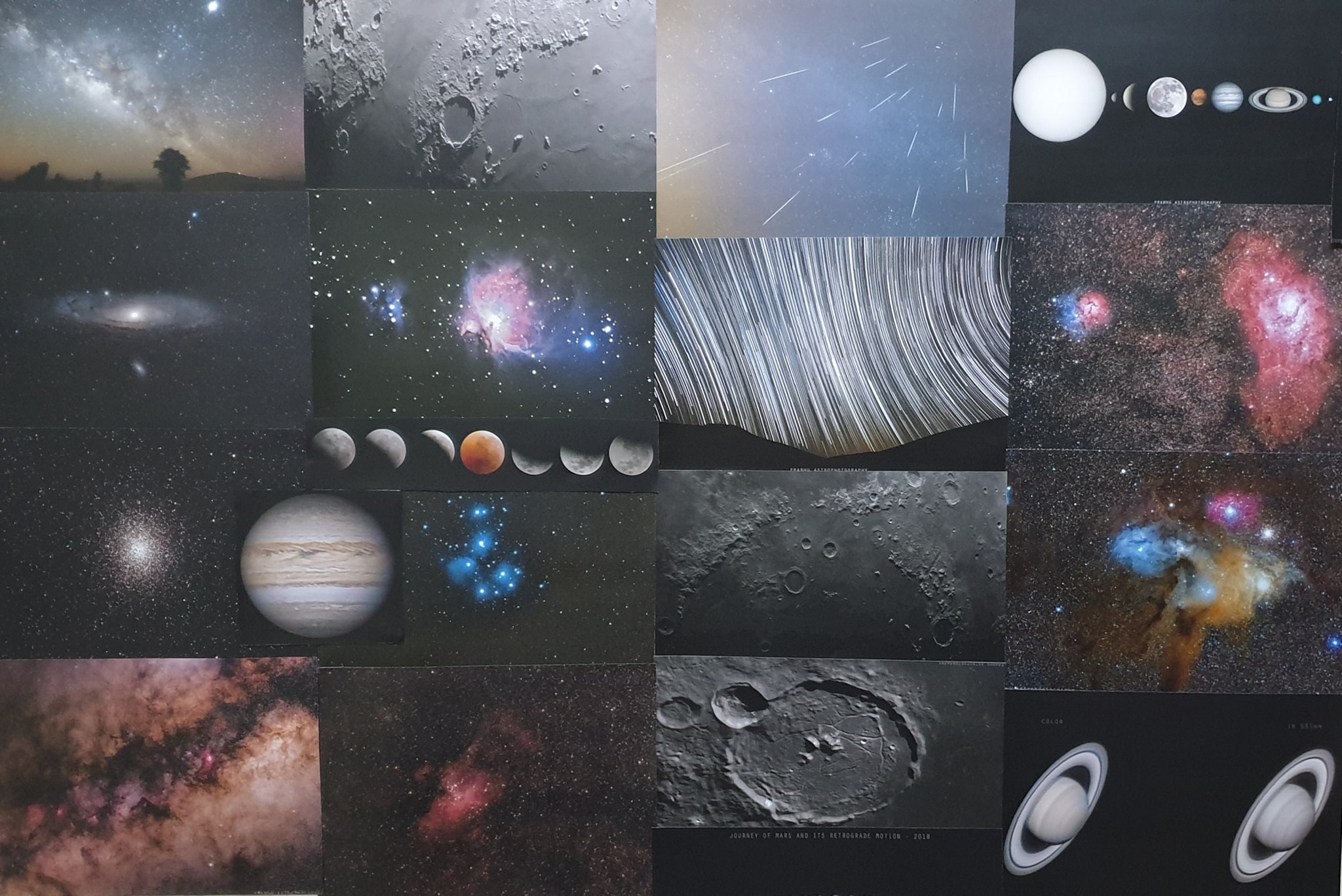 A collection of planets, galaxies, and nebulae imaged by Prabhu

Becoming an amateur astronomer is a meticulous process and has different phases to it. The first step is to have the right commitment to the craft. To have the right commitment, you need a strong motivation. For Prabhu, the motivation was brought forth from his childhood memories of noticing cloudy patches in the night sky, which he later realized was the Milky Way Galaxy. This was such an eye-opening moment for Prabhu, which subsequently influenced him to discard his career path in engineering and led to his Diploma in Astronomy & Astrophysics. Although formal education in astronomy helps, it is not an absolute requirement. You either can get a formal education and become a professional astronomer or learn by yourself with the available resources and turn into an amateur astronomer. Also, it is never too late to get into Astrophotography. If you have the interest to learn, you very well can channel your focus. 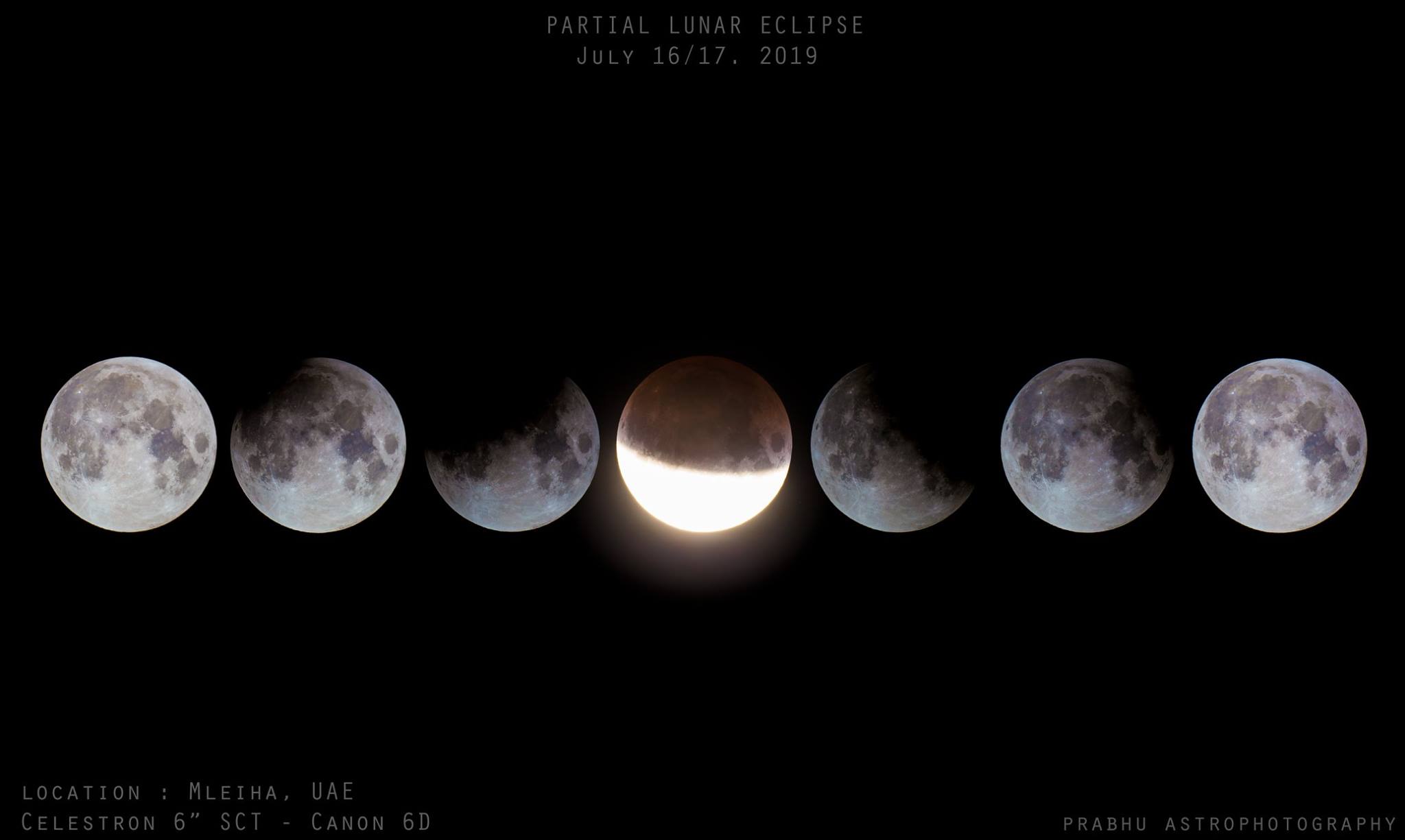 In the beginning, people get excited about space and would start searching for telescopes to buy. Prabhu (and I) would advise you to take one step at a time. In order to buy a telescope, you need to know what your targets are and the techniques involved in observing and imaging them. Even Prabhu, during his initial days, reached out to several amateur astronomers including our club’s co-founder Siva. Prabhu shared the knowledge gained by interacting with the veterans back then and I quote, “based on the inputs from others one thing becomes very clear, if you are interested in astronomy and don’t have any experience with telescopes then the 1st thing to do is not to buy a telescope, learn the basics, motion of the sky, celestial objects etc, once you have an idea about the night sky start observing it with your naked eye, learn about the constellations, try to recognize the constellations and observe the naked eye objects such as Moon, planets, stars, clusters, nebulae, galaxies(Andromeda and our home galaxy), then the next step is to purchase a good binocular and start seeing the above mentioned objects through it, obviously you won’t see the objects up close but this is the proper way, once you are done exploiting your binocular and if you feel that you want to upgrade it to the next equipment then buy a good telescope, Prabhu followed the same thing, he learned the basics and observed the sky for almost a year then he observed the night sky with binocular“[sic].

Later he decided on getting Celestron Astromaster 130 EQ, a decent and affordable beginner telescope. Instead of buying a costly telescope and regretting it later, its best suggested to learn the basics firmly, and in due time, you will choose the right tool. If you need detailed help on choosing your first telescope, kindly read our article: The Ultimate Guide to Choosing Your First Telescope.

So, you have bought a new telescope after a rigorous hunt. Now you will face a larger dilemma with a lot more questions lingering your mind. Is pointing the telescope towards the sky and observing the next step? Learn further about the Imaging techniques, cameras, and lenses? Get acquainted with dark zones, constellations, sky patterns? To be abrupt, there is no one right path. This stage differs widely from one amateur astronomer to another, as most of us believe in trial and error. 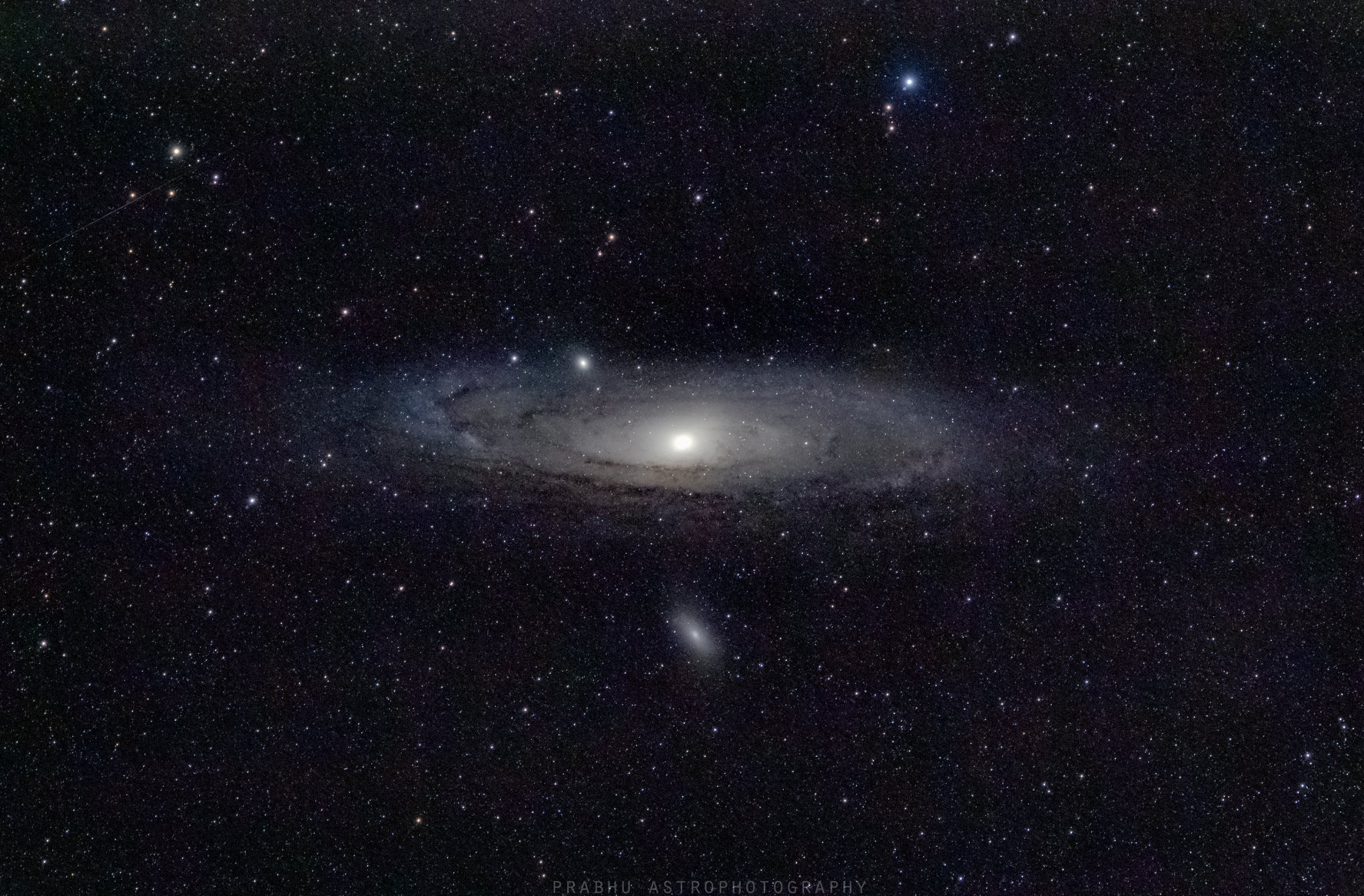 Here, I would suggest you to go all guns blazing. Set up your telescope. You might go wrong with the first step. Try again with the help of an online tutorial or reach out to the good folks at Chennai Astronomy Club. Start observing with your telescope – be it a nearby landmark (terrestrial observation) or the moon (astronomical observation). By practice, you will get better at setting up the telescope and pointing it to the right objects in the sky. As far as imaging is considered, trial and error is the best method to learn (at least it was for me).

Got a blurry smudge as your first image? Unable to track an object? Not sure about the ISO settings for the lunar crescent? Rain interrupted your star trail session? Fret not! It happens to the best of us. For instance, finding a dark sky in the urban centers would be troublesome. For brighter objects such as our moon, you can improvise on the situation by reducing the ISO and enhancing the image in post-processing. It will not be a perfect image that you would want. But you would’ve learned few post-processing techniques. For later sessions, you can plan to overcome that particular situation by getting an LPR (Light Pollution Reduction) filter, or if you want to go frugal, well, just plan ahead properly about the nearby dark zones. Either way, you would’ve become wiser by the end of the day. 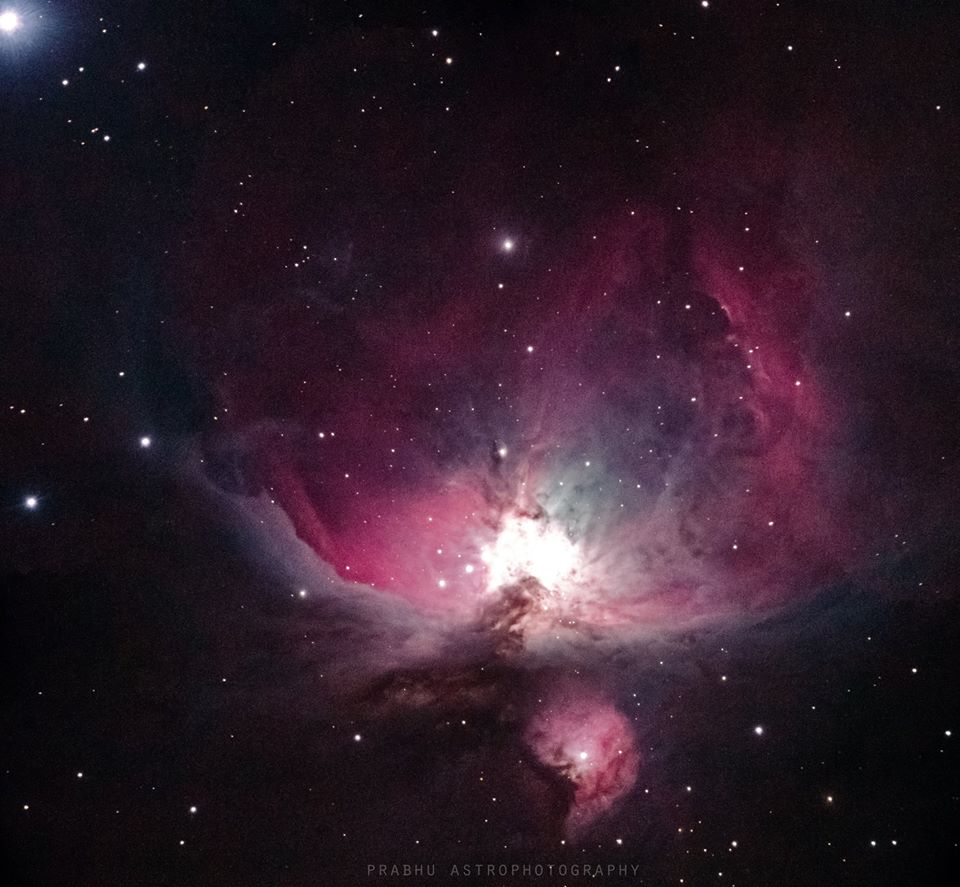 According to Prabhu, during his initial days, he too faced difficulties with light pollution and could not overcome the predicament by buying equipment. Apart from being costly, the availability of quality tools and its logistics are also known issues. So, he improvised and used the resources within his reach and learned more foolproof processing techniques. Perhaps his early experiments have contributed to his holistic approach.

After facing myriad hurdles, now you have a decent knowledge about astronomy and have gotten yourself into astrophotography. The images you take – extraordinary or awful – needs assessment other than yours. Share it with your trusted friend or post it in the Chennai Astronomy Club Page or directly reach out to any of the experts in the field, as your techniques will get better with each and every insight. Do not be shy (like me) to interact, as astronomers are some of the humblest scholars I have come across.

Left Image: Hubble’s Jupiter image downloaded and processed by Prabhu to show the difference over the years. Right Image: Prabhu’s image of Saturn.

For years, I have been troubling my mentor Prabhu even on my silliest doubts, and every time he gracefully offers comprehensive guidance. The path wouldn’t have been easier for Prabhu as well, but now he is yielding all the benefits. You can check out his complete portfolio in his website, Facebook, Twitter, or Instagram. Apart from being active in these platforms for outreach, he also co-hosts an impressive youtube channel called Scientific Thamizhans. The channel has gathered 75k+ subscribers in a short time and has influenced the general public to focus on science. It is not an exaggeration to say that they have lived by their motto – A project to communicate science to the general public in Tamil.

As informed earlier, there are two types – Professional Astronomer and Amateur Astronomer. If you want to become a professional astronomer in India, there are limited but exciting options available. First, for a formal degree, there are few institutions in India that offer related courses. Indian Institute of Astrophysics and Indian Institute of Science at Bangalore, Tata Institute of Fundamental Research at Mumbai are prominent institutes offering courses related to astronomy from Bachelor to Doctoral Degrees. Employment options after gaining a degree is the tough part, as there are very few opportunities available in the country. 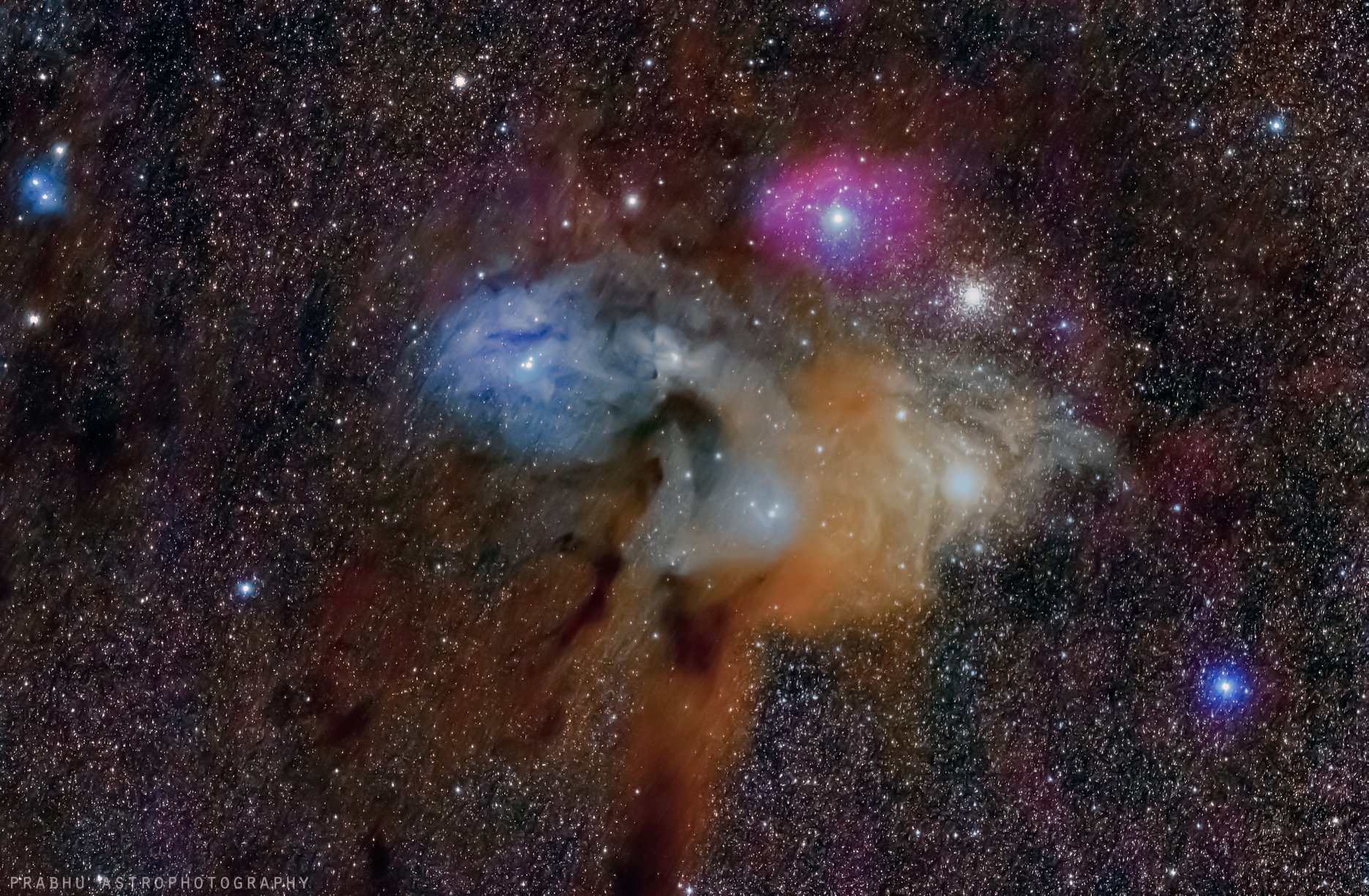 As of becoming an amateur astronomer, it is not as plain as it sounds. After getting a clean shot of the moon, you will not be a qualified amateur astronomer (although technically you can call yourself one). That is because amateur astronomers have contributed massively to the scientific community – be it the recent discovery of the 2nd interstellar object (Comet Borisov) visiting our system in 2019 or William Herschel’s discovery of Uranus in 1781.

Ultimately, it is the satisfaction of learning and spreading knowledge amongst the masses, which drives most of us in pursuing it. Prabhu shared his future plans of building an observatory and conducting outreach programs. 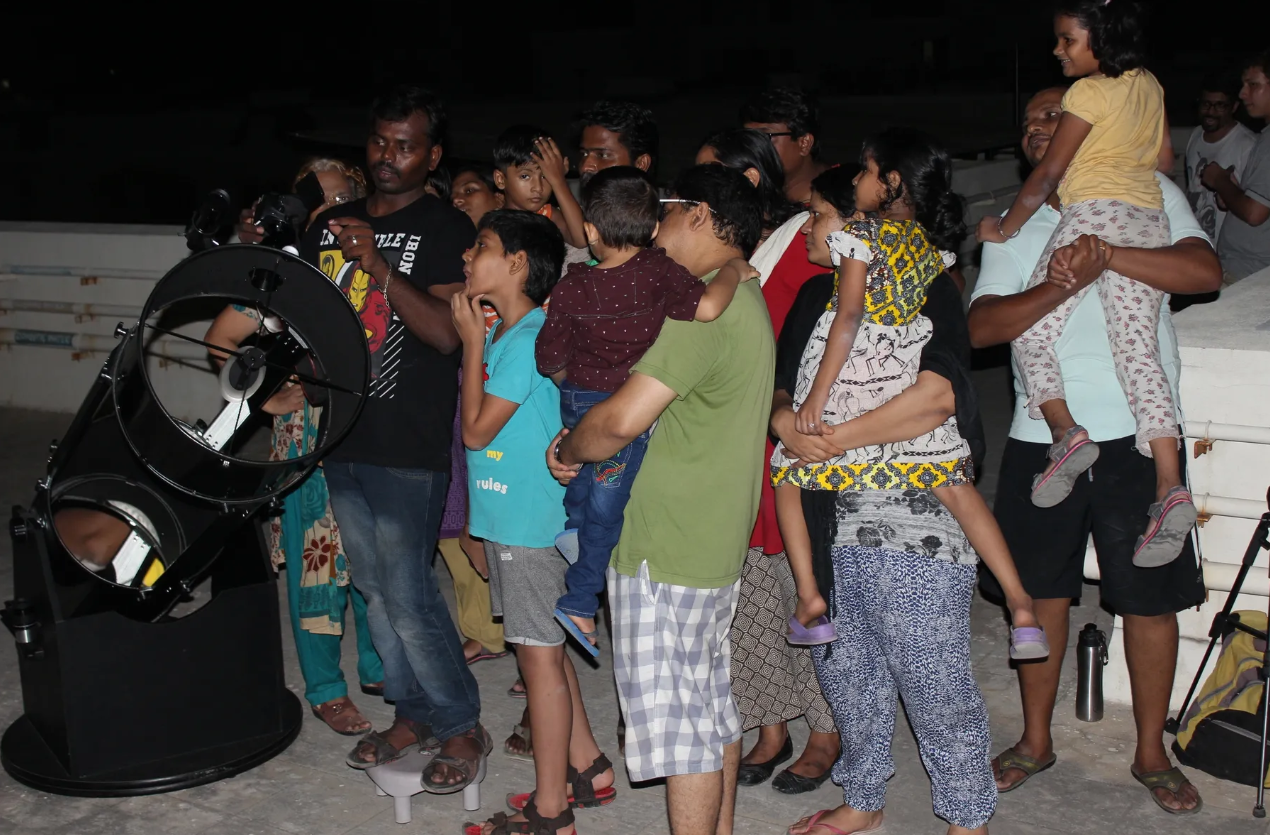 Prabhu during one of his public outreach events

For him, the sight of people looking into the eyepiece of his telescope for the first time realizing the magnificence and vastness of our universe, is an experience like no other. 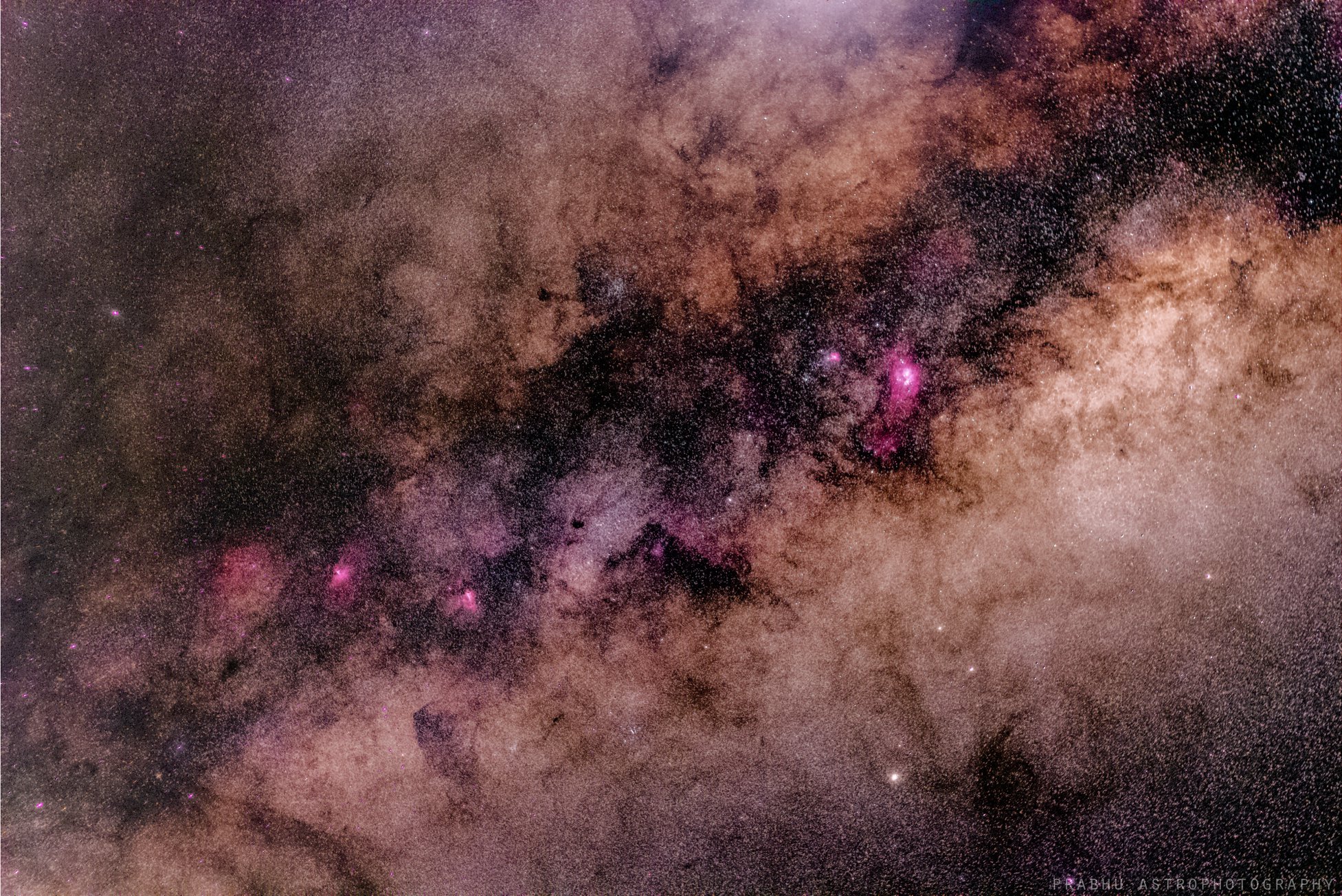 Long Exposure of the Milky Way

He concluded by saying, “Everyone should know our place in the universe. Everyone should learn about it in their lifetime. Astronomy is beyond everything; it is fascinating in its own way! Whatever we learn and we do, it ends within our planet. We do it for our living and survival but Astronomy is all about our universe. It makes you feel how small and how insignificant we are in this vast universe. It changes your perspective of seeing everything and it makes you to appreciate your surroundings and to spread love among others in this beautiful precious planet“[sic]. Hopefully, we get to see more of his incredible work and, in the meantime, follow his path towards excellence.

Interviewed and Written by Sabari Nath.